Greetings readers I hope everyone will have a great week 🙂 school has started and in different county’s their are  communities in different cities who are opening slowly as we all move forward towards Social Growth. Nothing will be the same even though we are accepting this change regarding the Coronavirus. As a leader I am proud of the way this change has brought attention to our lives of the Black Culture 🙂 and  who has taken a stand against racism and Social justice. What touched my heart is how white americans, including all other races have  joined together to establish and demand this change:) my grandson is 12 years old and I am releived Now that he has a chance to grow up and become a young king, who will have the opportunity to dream ! I do 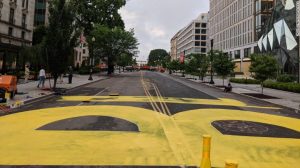 understand that we still have a long way to go however, what has been allowed to live in the darkness will be confronted in the light. From leaders all over the world and throughout the United States per Governors, Mayors, Politicians of both parties, Bishops, Pastors to entertainers and MBA players we all are demanding change:)

CNN’s Paul Murphy and Nicky Robertson contributed to this reportreported In Washington, DC is painting a message in giant, yellow letters down a busy DC street ahead of a planned protest this weekend: BLACK LIVES MATTER.

The massive banner-like project spans two blocks of 16th Street, a central axis that leads southward straight to the White House. Each of the 16 bold yellow letters spans the width of the two-lane street, creating an unmistakable visual easily spotted by aerial cameras and virtually anyone within a few blocks. I am very proud of everyone who is taking a stand to protest what has been a long time coming! and as we all move forward we have taken another mile stone and elected the first Africian American Women ” Kamala Harris”  to take a seat as VP and to stand with Mr. Joe Biden 🙂 Now that is what I call change ! do not for get to register and vote, and I leave you  readers with my favorite 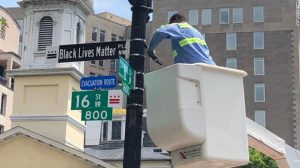